Everton’s ‘Hall of Fame’ Events through the Decades

Friday, 10 March, 2017 sees the staging of a Gwladys Street’s Hall of Fame event after an eight year hiatus. At The Hilton Hotel John Bailey, Pat Van Den Hauwe, Nigel Martyn, Ian Snodin and Kevin Campbell will join the 120-plus previous inductees in the pantheon of Blues greats.

The concept of an independent Everton Hall of Fame was the brainchild of Dr David France, the uber Toffees fanatic, who was inspired by the veneration afforded ex-baseball players in the USA.  It was the first of its kind in the United Kingdom. In 1998, a panel of ex-players (including Brian Labone and Alex Young), shareholders, Merseyside sports journalists, Sir Philip Carter, season-ticket holders and other Evertonians convened by “Dr Everton” considered the claims of over 900 past-players for inclusion in the first draft of inductees. The benchmark was to have made a significant positive contribution to the Blues cause through ability, determination and sportsmanship across all eras of the club’s history. In the end 75 former players and 5 other club servants made the cut.

In February 1999 the first gala was held at the Adelphi to celebrate the launch of the Hall of Fame. David had spent many months, in that pre-digital era, tracking down former players to invite – often relying on Brian Labone’s lengthy list of contacts. That first, raucous event has gone down in Goodison folklore. In excess of 100 men who have donned the royal blue shirt, Kendall, Collins, Fielding, Gabriel, Lyons, Royle, Hickson and Ratcliffe amongst them, were there to experience a level of hero worship that they had not enjoyed since they hung up their boots. 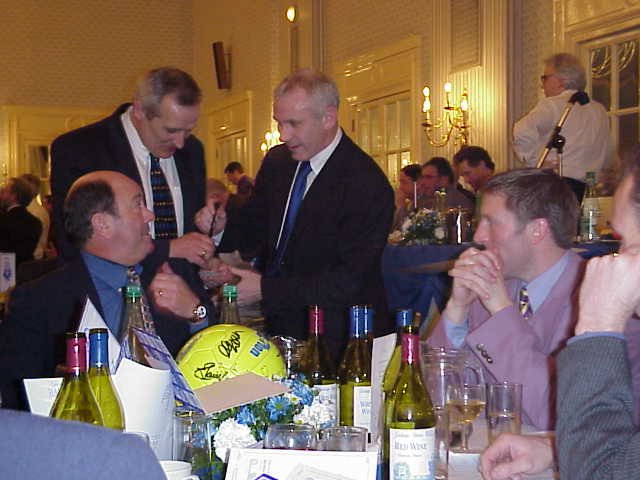 In his memoir, Everton Crazy, David recalled that the festivities continued way past the designated curfew, in spite of the best efforts of the man himself and hotel management. The evening dinner festivities ended up segueing into breakfast. Ten subsequent annual fan ballots saw the Hall of Fame ranks swelled – with many new inductees presented to the enraptured supporters at Everton love-fests held at the Adelphi. Benefitting, financially, from these gatherings was the Everton Former Players’ Foundation – another concept instigated by the mercurial Dr France.

The tradition of celebrating the club’s heritage and former servants goes back nearly 90 years.   On 23 April 1929 Everton F.C. held a banquet at the Philharmonic Hall, ostensibly to commemorate the golden anniversary of the club (technically this was the previous year) and the publication of the club’s biography, authored by former board member Thomas Keates (who died shortly after its completion).

600-plus guests assembled to toast the achievements of the club in what the Liverpool Echo journalist Bee described as a “capital setting”.  The League championship trophy, won by Everton during the previous season, and other items of silverware, were proudly displayed. The job of compeering the mammoth event fell to club chairman, William Cuff.  One by one he called to the stage the players and officials who had helped to make the one-time St Domingo’s Church football club, one of the giants of the game. Lord Derby (whose ancestor gave the famous Epsom horse race its name) arrived from London by train shortly after the event had commenced. He conveyed the joy the King and Queen had felt when witnessing a display by schoolboys and schoolgirls at Goodison Park in 1913. Also in his address, he stated: “As long as we live there always the hope that next season will bring off the double event by winning the Football Association and the Football League Championship. One hundred and thirty-seven years elapsed between my family first won the Derby and won it again, so you may take consolation with me and go on hoping.”

In addition to Harold Hardman, representing the denizens of Old Trafford, Everton’s Vice-chair, Ernest Green, toasted invitees from  Liverpool FC, Aston Villa, Newcastle, Burnley, New Brighton, Tranmere Rovers and Manchester City plus the  English, Scottish, Welsh, and Irish F. A.’s.  Tom Crompton, chairman of the Liverpool FC, reminded the attendees that he, too, was a former Everton player.  One other ex-player, whose name was not reported in the press, asked that his ilk not be referred to as veterans.  So Bee suggested, in his newspaper column, that they be known as “Wonderful Old Players”

Mr. C.E Sutcliffe, proposing a toast to “The Everton Club”, claimed: “If I were asked to name two of the finest sporting clubs in the country,” he added “I think that I should place Everton first as a real, good, honest sporting club that has made its mark in the world of sport.  Everton is one of the clubs whose name was not only respected in Lancashire and England, but throughout the whole world.”

Will Cuff, responding, proclaimed: “I am sure you will agree with me when I say that this is a momentous occasion. It is an event unique in the history of this club, and very nearly in the history of most clubs. If you don’t agree with that you will agree that it is extremely improbable that this occasion is likely to be repeated in this club in the presence of any one of us here.” He went on to reflect on the club’s achievements and innovations  – including the use of goal nets,  the publishing details of the home and visiting players in the matchday programme; numbering the players on the programme and indicating changes on the board, showing results on  “telegraphic indicators”, setting aside a league match as a benefit to a player and guaranteeing a £500 benefit payment to a player.

Touching on the scientific tag that Steve Bloomer had bestowed on the Blues, Cuff stated:

“The one outstanding feature of the club has been the ideal that whatever the result, the team would play a scientific type of football, and I feel that we have achieved that ideal. It has been argues that the purest football, is that which is played on the turf and not in the air… Ladies and gentlemen, we have endeavoured to cultivate that style of football. We may not have much to write home about when we talk about winning championships and cups, but all that…is not the be all and end all of football. Above all, the game is the thing that matters”.

James Galt and Fred Geary  replied on behalf of the guests whilst  W.R. Williams purposed the toast of the Chairman. He said; “Thirty-five or so years ago there entered into the councils of the Everton club a dapper young gentleman with an undoubted profile destined to play a large part in the councils of the club in years to come…Through the length and breadth of the land…Mr  Cuff and the Everton club are synonymous terms. Everywhere he has gone he has been received with open arms and respect.”

Musical accompaniment throughout the function was provided by Mr. J.L. Pennington’s orchestra, assisted by the vocal talents of  Mr. Eric Child and Mr. Griff Williams. The momentous event closed with the singing of “Auld Lang Syne.” Chairman, Philip Carter, who presided,  welcomed the guests and announced that Everton was “on the threshold of another golden era.”  Gordon Lee gave, what was reported to be, a stirring speech which earned an ovation. In a nod to the 1929 event, thirty former players were introduced individually onto the stage,  each receiving a wonderful reception. Gordon West, displaying trademark wit as he descended from the stage, moaned about Billy Dean: “He could never play – and he got a bigger reception than me!”

Roll on 2028 when, one hopes, there will be many reasons to be cheerful and a 150th anniversary event to match those that have gone before.

For more information on the Gwladys Street’s Hall of Fame visit www.evertonhalloffame.com